“Be brave. Take risks. Nothing can substitute experience.” – Paulo Coelho

5 rounds for time of: 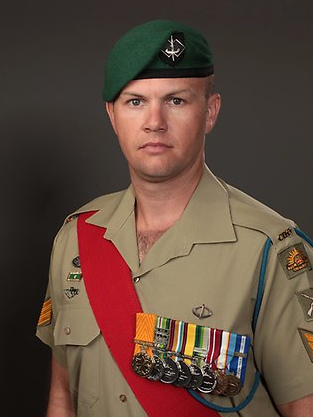 32-year-old Brett Woods is an Australian Special Forces Commando and was killed in Afghanistan in May this year. He died instantly when an insurgent IED exploded on a foot patrol he led in the Kandahar Province.

Wood was an esteemed member of the Australian Defence Force and was awarded the high honour of The Medal of Gallantry during his first tour of Afghanistan. As the plague at the Australian War Memorial in Canberra reads:

“On 17 July 2006 the commandos were sent into the Chora Valley, Uruzgan, with a US infantry unit, to clear out an enemy sanctuary. Both units came under heavy fire and sustained numerous casualties. Despite being wounded himself, Wood immediately responded to his commander’s order to regain the initiative. With speed and aggression, he cleared a number of compounds sheltering the insurgents, allowing the Australian and US soldiers to continue the battle and airlift out the wounded and dead.

The award citation states that Wood displayed “gallantry and leadership in the face of the enemy… of the highest order” and that his actions “were testament to the his leadership, fortitude and sense of duty to his team and the platoon.”

Sergeant Wood’s good friend, Jamie Z wrote the following description of how the workout was created.

“As a member of CrossFit it was only natural to write a Workout of the Day for my friend Brett. Initially it was just an idea between mates. Without the initial and ongoing support from Mick, Steve and David, who assisted with the development of the workout, it would have remained an idea.

Then I met Jimmy, he was committed from the word go and came on board to assist bringing this idea to life. CrossFit is second nature to Jimmy and so the stage was set.

Thanks to Jimmy, Brett’s Hero Workout has gone viral as Boxes across AUS, NZ and the US, ADF units and other agencies have all come on board to support the welfare of Commandos and their families

HERO Workouts Of the Day’s are meant to be tough and to test your physical and technical ability. Brett loved running, reflected in the 400m sprints. Brett loved standard lifts and repetitions, which you’ll discover in SDHP, and thrusters. When it comes to the burpee box jumps, well, this is a lung and leg buster, and that is something Commandos and Soldiers alike endure in training and on operations. The rest is for consolidation, reflecting on what has been and what is about to happen.

The workout that was chosen to honour and remember his name is:

Sergeant Brett Wood is survived by his wife Elvi, his mother Allison, and his father David. The Commando Welfare Trust has been created to support both initial emergency funding as well as long term financial requirements of families in times of hardship where existing funding, grants or entitlements no longer provide support.

You can make a donation by following the [Commando Welfare Trust]